If you travel to Cuba, you cannot avoid the capital Havana. I also started my 3-week round trip through Cuba in “La Habana” . I recommend you plan at least two, preferably three days for Havana. I was in Havana for three days.

In Havana I explored the old town Habana Viejo , which is under UNESCO World Heritage protection. I visited the Havana Rum Museum , Hemingway’s favorite bars high up in the air , strolled along the Malécon promenade to name just a few places.

Havana is like an exciting book. You start to run and you don’t want to stop getting lost in this city. There is no shortage of sights in this city and I could stay here forever.

History buffs as well as classic car fans get their money’s worth in the third largest Caribbean metropolis. There is something interesting to discover on every corner.

At the end of the article you will find tips on what you can do in Havana in 3 days, a note about our accommodation and other impressions from Havana.

In 2021 the best credit cards are the VISA card from DKB Bank (as an active customer) and the GenialCard from Hanseatic Bank . With these cards you can withdraw money from ATMs for free and pay on site without paying foreign fees abroad in foreign currencies!

My tip for a sustainable account is Tomorrow Bank . I like to use this credit card in Germany and Europe (Apple Pay also works with it).

This grandiose architecture at first sight and the decay of the buildings behind the showcase façades make me sad. Just like the stark difference between our life as tourists and that of the Cubans. Despite poverty, nowhere else (except in Africa) have I met such a proud and cheerful people.

Nowhere else do so many shops open to tourists with tourist currency (peso convertible) and lock out locals with national currency. A negative phenomenon that many tourists turn a blind eye to or not even notice.

We have the privilege of enjoying our mojitos in fancy bars while locals line up next door with food stamps for rationed goods.

In Habana Vieja and Centro Habana there are often alleys that either have no street signs or two: one old and one new. Sometimes only the new street names are written on, but Habaneros still use the old ones.

So if you ever need to ask for directions, find out what name is given to you. But you can get along quite well with a city map. 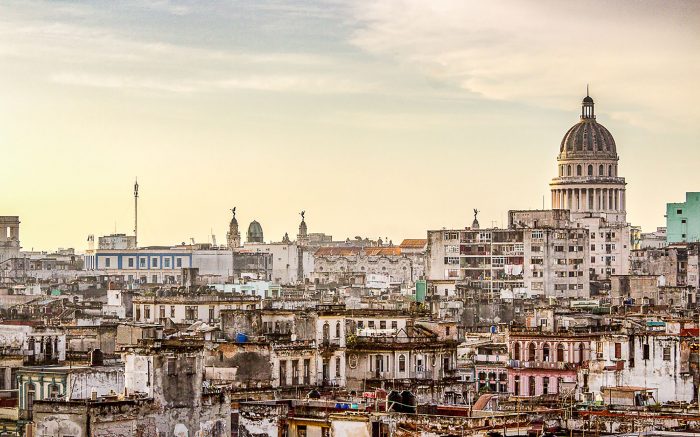 Highlights and sights in Havana

Habana Vieja (Spanish for Old Havana) is a UNESCO World Heritage Site. Many buildings have been falling into disrepair since the Cuban Revolution. Some have been reconstructed and restored. Many have now been evacuated due to the risk of collapse.

You should do that

Discover the old town on your own. Walk through the alleys and discover hidden places and corners. Even at night you can move around the old town without having to be afraid. Don’t always believe travel guides. The old town is really safe.

This picture is not exactly picturesque. I still love it and I can proudly say that it was featured as a double page in the 2nd German issue of Lonely Traveler magazine:

The picture shows the mixture of beauty and decay very well.

One of the most beautiful and popular streets in the old town is Calle Obispo, once Havana’s first paved main street. You can find interesting shops, cafes and bars here. In addition, the Hotel Ambos Mundos , Hemingway’s favorite hotel , the Hotel Floridita with its impressive lobby or the Bank Nacional de Cuba .

Since the street has been extensively restored, you can best imagine how radiantly beautiful Havana must have been. Leave Calle Obispo and turn into a small side street. Here you can see the actual Havana: ruins of houses, decaying and partly threatened buildings, which must once have been as magnificent as the restored buildings.

Definitely avoid: Have a drink at El Floridita. Completely overpriced.

What you should do: You shouldn’t miss a visit to one of the two old pharmacies “Taqueche” and “Johnson” . Here you feel like you have been transported back years.

Everyone walks past the 7 km long promenade at least once during their stay in Cuba. I was out here every three days. The former boulevard extends from the old town to the Rio Almendares and connects the districts of Habana Vieja, Centro Habana, Vedado and ends in Miramar.

The most beautiful part is to the east at the Castillo de la Punta. Couples in love and “Habaneros” meet here to chat when meter-high waves don’t crash against the wall.

Views: Havana from above

I love views of cities from above. In Havana I had the opportunity to enjoy several: 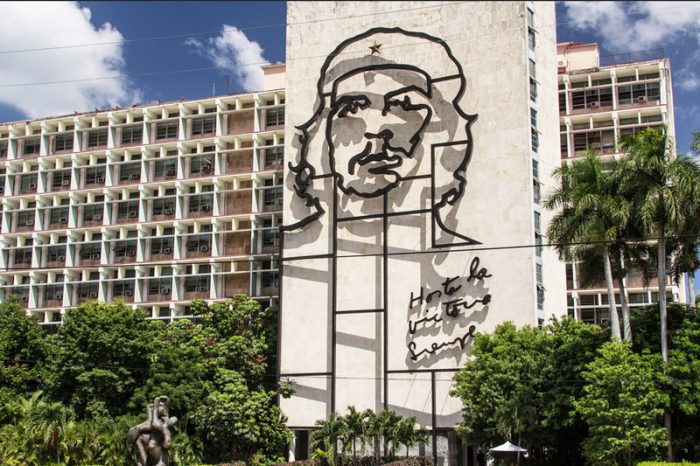 The Plaza de la Revolucioón is located between Avenida Carlos M. Céspedes and Avenida Rancho Boyeros (Vedado). Major events such as free concerts in Cuba are held in this huge square. From a distance you can see the 139 m high obelisk in honor of José Martí, Cuba’s national hero.

Around the square are the Ministry of the Interior and the Ministry of Economics, the National Library and the Telecommunications Office. Until we visit, we are more familiar with the buildings (and the faces on them) than their function:

The former presidential palace from the Batista by Fidel Castro and Co. is now only a museum. The bullet holes in the marble on the stairs inside the museum are testimony to the fight.

The museum is super interesting and shows the history of the Cuban revolutionaries – unfortunately often only in Spanish. The yacht “Granma” is also exhibited here. With this luxury yacht, Che and Fidel came from exile in Mexico to take up the fight.

The large dome of the building and the hall of mirrors, which are modeled on the one in the Palace of Versailles, are also impressive. Where receptions once took place, today you can only find an oversized Cuban flag.

Visit a grocery store in Havana

Cubans still shop with grocery stamps. Only people who have the convertible peso (CUC – tourist currency) are allowed to go shopping in “real” supermarkets. It is written on boards who can get how much per product.

Plaza de Armas means weapons place. Nowadays you can only find books here. Old books on revolutionary literature and postcards. But you should also keep an eye on the buildings around the restored square. The Palacio de los Capitanes Generales (City Museum) and the Palacio del Segundo Cabo (National Book Institute) are particularly magnificent.

Capitol – landmark of Havana and next to it the Gran Teatro

It is not only reminiscent of the building of the same name in Washington, it should also look like it. The Capitolio was once the real seat of the House of Representatives. Today you will find the National Library, an internet café and the Academy of Sciences in it. Unfortunately, the interior was closed for us due to construction work.

The Gran Teatro is right next to it. 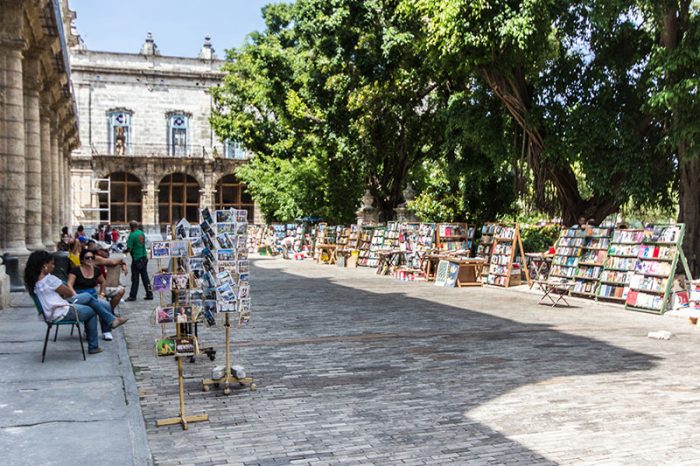 Just because of the great view of Habana Vieja and the Malecón is worth a visit. For a small surcharge to the minder, you can take a seat in Che Guevara’s former chair behind the barrier. We refused.

It’s a little uphill to the Universidad de La Habana. From the Malecon on Calle 23 (also called La Rampa), turn left at the famous ice cream parlor Coppelia towards Uni. The university is located in the Vedado district.

Personalities like José Martí or Fidel Castro studied here. You can rest for a few minutes in the courtyard. In contrast to the hustle and bustle in the city, it is pleasantly quiet here. The many trees provide shade and not too oppressive heat. We pay the students a short visit in one of their rooms.

In the Calle San Ignacio in Habana Vieja you will find this square with the cathedral and restored palacios. The former Palacio and today’s restaurant “El Patio” is particularly popular. You should make a reservation.

What you can do in Havana in 3 days

The hotel must have had better days. But the location right on the Malecón is excellent. The double rooms are huge. We have three beds to choose from and everything is clean. In the hotel bar there is of course Mojito and Cuba Libre for 2.50 CUC each (Peso Convertible, equivalent to 1.90 €).

Since I read the instructions for use for Cuba before the trip , I am amazed that there are even “Western brands” such as Red Bull, Becks, Coca-Cola, Fanta. Is the travel guide exaggerating again?

I’ll tell you: no. Enjoy all of the choices you have here. It will change suddenly towards the south.

Best time to travel to Havana

Havana is actually a city that you can visit all year round. Since it rains the least on average between November and April, these are also the best recommended travel time for Havana.

There are 6 – 9 hours of sunshine per day and the temperatures are between 26 and 30 degrees. Note that the rainy season does not mean that it will rain all day. Short and heavy monsoon rains are the rule. After a few minutes, however, the rain is usually over. At least that’s how it was with us. The official hurricane season runs from July to October. A hurricane hit us at the beginning of November, shortly after we left.